Below is a look at year-over-year movements in total pay for CEOs, CFOs, and other named executive officers sorted by company sector and revenue size. This data is taken from the CompArchive executive compensation database and represents more than 4,000 companies. A few key findings: 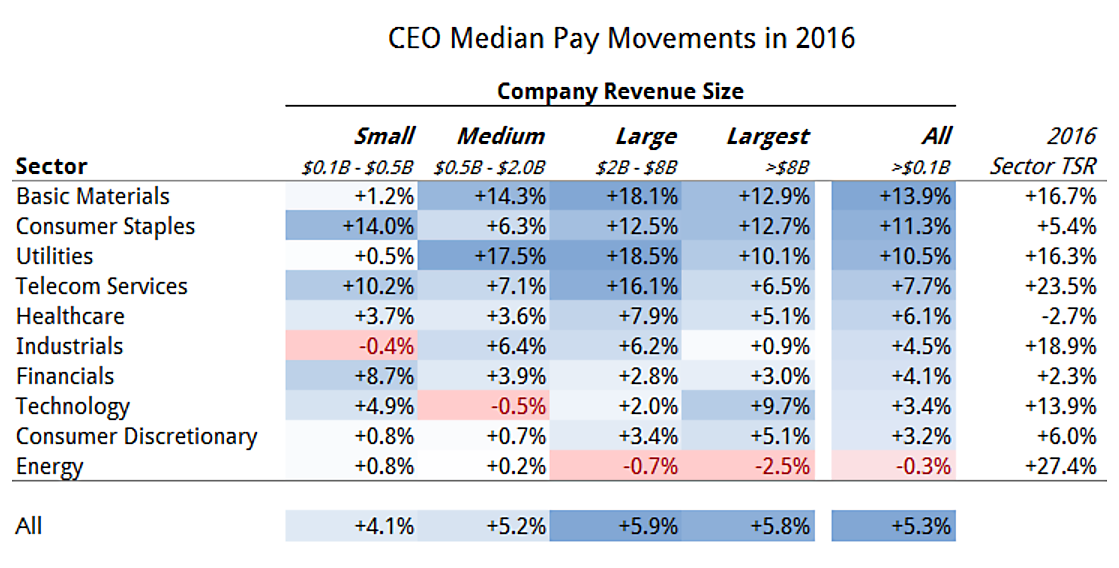 The table above illustrates median movements in CEO total pay by revenue and industry sector, excluding companies that underwent a CEO transition in the last fiscal year. The industry sectors are ranked in order of their overall median pay movements.

Pay increases are broadly similar (between +4% and +6% at median) among the various company revenue size brackets when industry sector is ignored, with an overall trend towards higher pay increases at larger companies.

CFO pay movements exhibit a similar dependence on industry sector. The rows in the table above are listed in the same order as in the CEO table, for comparison. The color coding suggests that, in general, those sectors that enacted larger CEO pay increases also tended to enact larger CFO pay increases.

Overall, CFO pay increases lagged slightly behind those of CEOs, with the general industry revenue size brackets spanning +4.4% to +5.5%.

Pay increases among other executive officers vary similarly with industry sector. Pay movements were lowest within the healthcare sector, where the majority of named executive job roles fall within the categories of business unit head, top medical, or top science officer.

Overall, pay movements for this group were less positive than those for CEOs and CFOs, at 3.5%, or roughly in line with typical salary budget increases over the last few years.